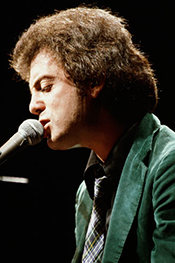 In early 1977, Billy Joel was looking for someone to produce his now legendary album, “The Stranger.”

He asked one of the biggest names in the industry- Phil Ramone, and Phil decided he first wanted to first take in a Billy Joel concert to hear the new material.

Turns out he was blown away, and went on to produce the album.

This weekend, we’ll hear that performance! It was captured live at Carnegie Hall in New York City on June 3rd, 1977.